It occurred sometime last week and I missed it. To be honest, it has actually occurred every year since 1908 at different times of the year so I sometimes just lose track of things. Not that I dont care but I do try (not) to "celebrate" this event. 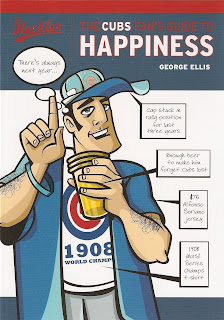 Yes, you might have guessed it, the Chicago Cubs have been officially eliminated from the playoffs, let alone winning anything this year. In honor of this moment I have turned to a book that offers some levity to this situation, titled: "The Cubs Fan's Guide to Happiness" by George Ellis, circa 2007.

With chapters such as; Beer will make it better (Chap 2) and At Least You're Not a Sox Fan (Chap 7) to the 15 Habits of Highly Happy Cubs Fan's the theme of being "frustrated" for 100+ years is evident throughout out these pages.

So as the season winds down with some teams preparing for or pushing themselves for that last run at the playoffs and potential World Series celebration, other teams just go home ashamed of under-performing, I turn to a book.

We however as the eternal optimist called a Cubs Fan, we simply chant "wait til next year".
Posted by Unknown at 11:30 AM No comments: