I confess, I am a "numbers geek" - not really a statistical numerologist but I like looking for patterns and quirky things with numbers (that is the "old" math teacher coming out in me).

Today is also Willie Stargell Birthday. He would have been 69 years old but passed away in 2001. Stargell hit some of the longest homeruns in major league history; the only player ever to hit a homer out of Dodger Stadium twice, reaching the upper deck at Olympic Stadium in Montreal, and hitting the furthest shot ever recorded at Veterans Stadium. Stargell ended his 21 year career (all with the Pittsburgh Pirates) with 475 career round trippers, most of which were considered monster shots.

One of his "secrets" to his Ruth-like power was warming up with a sledgehammer in the on-deck circle instead of just a lead weighted bat. Seven times an all-star, two times a World Series Champion (1971, 1979), the 1979 NL MVP award, and a first ballot Hall of Famer (inducted in 1988). 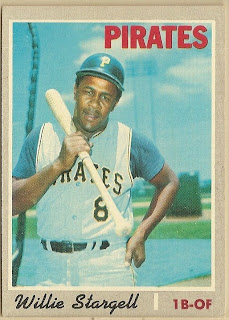 I like this 1970 card (Topps # 470); the double hat both looking too small for his head and that sleeveless vest style uniform. Happy Birthday "Pops", some of us do remember your power.