Cubs three Hall of Famers from 1969

Jenkins, Williams and Banks: three names in Chicago Cub history that is synonymous with the potential the Cubs had throughout the sixites. Three players, who are among the greatest players of all time to never, play in a World Series game.

Six years separate each in their major league experience as th 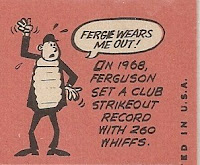 he consistent powerful offensive production coming back from his 1968 numbers 30 HR, 98 RBI and a .288 batting average and then there was Banks. 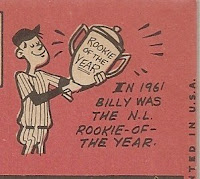 Banks, entering his seventeenth year as a Cub coming off of hitting 32 round trippers in 1968, the most he had had in six previous seasons.

The front of the 1969 cards of these three; the intensity of Jenkins eyes, the power in Williams’ swing and the playful smile on Banks make for the high hopes entering 1969 even more thrilling. The full card photo and white frame with a thin black outline make for a real clean looking card. The orange circle with the players

name and position is a nice touch.

Banks’ card has this orange circle right over his shoulder, looking like the sun, setting in the background at Wrigley and for his career.

The backs are no less interesting. Jenkins’ has a drawing of a skinny umpire saying “he wears me out” in recognizing Jenkins’ 260 club record strikeouts in 1968 (he would go on to break his own record in 1969 and then again in 1970) and Williams’ card showcases his Rookie of the Year trophy earned in 1961.

And then there is Bank’s card – no drawing just sixteen years of statistics, all with Chicago N.L. as his team.

Banks, Jenkins and Williams: the heart of the Cubs past, present and future (from 1969 of course); three great players who never played in a World Series; three Chicago Cub Hall of Famers.
Posted by Unknown at 4:30 PM