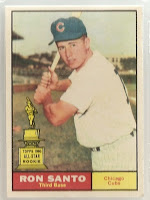 Santo is and always has been one of the most enthusiastic and passionate baseball people of Chicago. From his playing days to his broadcasting days there is not a day that goes by that his energy and excitement is not portrayed. Santo is credited with his jumping and clicking of his heels three times after an emotional win in July of 1969 and has been a trademark (for good and bad) of his fervor for winning.

Santo’s career statistics are well above average for third baseman; nine time all star, five time gold glove award winner, 342 career homeruns (337 with the Cubs) and defensive numbers that are in the top ten in every category. His role in Chicago goes deeper than just his playing days. Ron Santo may never make the Baseball Hall of Fame though his Chicago Cub number 10 was retired in 2003 (one of only four cubs with retired numbers; Banks #14, Williams #26 and Sandberg #23). That September day in 2003 was the day Santo told the cheering crowd of Wrigley Field “This is my Hall of Fame”.

The 1961 Topps # 35 rookie card of Ron Santo is important to me in many ways. Not only is it his first card in a Cubbies home white pinstripe uniform, posed with bat in hand looking down the left field line at Wrigley but it highlights the gold trophy designating Santo as a Topps 1960 All-Star Rookie. Santo used his rookie year as a catapult and earned this trophy over his fourteen years as a Cub (yes he played his final year as a big leaguer in a White Sox uniform but that was an uneventful and “miserable” year for him).

An interesting factoid on the back of this card reveals Santo began his minor league career as a catcher and led theTexas league in doubles in 1958 with 35 . . . the same number as this rookie card.


One final note about Ron Santo; he was diagnosed with Type I Diabetes early on in his life and concealed that fact for most of his playing days. Never one to complain or use this disease as an excuse he monitored his blood sugar levels on his own, medicated himself based on his moods and played through all the discomfort. Not until publicity surrounding Ron Santo day in August of 1971 did he reveal his struggles with diabetes. Ron Santo endorses the Juvenile Diabetes Research Foundation (JDRF) and the Ron Santo Walk to Cure in Chicago since 1974. In 2002, Santo was named the JDRF Person of the Year and has encouraged so many to continue to battle. Ron Santo has since had both legs amputated just below his knee.

Ron Santo has never lost his enthusiasm or passion for the Cubs or the City of Chicago.