more from the show

this being my second (and last) post "showing off" my finds at the card show this past Saturday I want to remind everyone that I did remember my promise to stick to my budget etc . . . and most of my "to do" promises for the wife . . .

At the last show I went to I was introduced to the 1995 Flair set with my the one only card, Sammy Sosa #334 - I really like this card / set and added them to my "look for" list. I found a small handful, actually 13 of these heavy card stock cards, in a bargain basket.

These three show off the fronts of my new favorite "modern" set. I really like the horizontal look, double photo, and scripted initials of the players (the scans may not be so clear for that ). Finding a future HOF'er (possibly two in Larkin and Johnson) as well as a Mark Grace was nice.

I also scanned a back for you to see. The backs show a third (different) photo of each player, is the traditional up/down orientation but only shows five or six years of stats (the only down side to these cards). I liked this Ryan Klesko photo . . . each hand holding a batting glove as he seems to be leading off of first base.

I also could not pass up on a few (actually found five) Ken Griffey Jr cards . . .

including two 1991's for my daughters binder and one for me with Griffey Sr and his two sons.

This small (10 card) sub-set is a real classic. I added these three cards to bring me only one short of completion (missing Babe Ruth # 345). Who can resist these classic black and white photos of when baseball was so different. 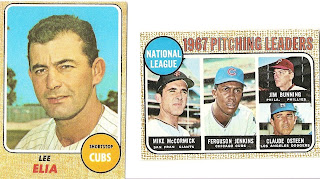 I also picked up a few random Cubs cards to fill some gaps; including these two; a 1968 Lee Elia # 561, though more famous for his managerial days / tirade he did appear as a pinch hitting infielder for the Cubs (though appeared in only 15 games) and a 1968 NL Pitching Leaders #5 with Fergie Jenkins.

And I could not pass up three great mustache cards !

So, all in all, I kept all (most) of my promises, had a blast looking around, added cards to several parts of my collection and now Opening Day is here !

Thanks for allowing me to share my limited yet fun additions.
Posted by Unknown at 10:30 AM