a backup catcher who played nine seasons with six different teams having his only multi-year stay as a San Francisco Giant (1965-69). A career .251 hitter, limited power (22 career home runs) and had more strikeouts than hits in his career (295K's to 287 hits). 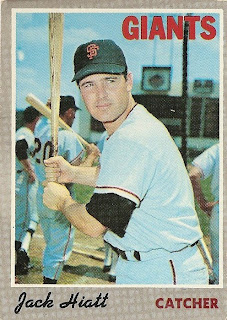 Hiatt did play for the Chicago Cubs, briefly as it was, in 1970; appearing in 66 games and belting 2 home runs.

Hiatt's "career day" was on April 24, 1969 when he hit two home runs and drove in seven; with a walk-off grand slam in the bottom of the 13th inning.