Being the first San Diego Padre star it is very appropriate that he is the first Padre to show up in this 1970's set.

Colbert was an expansion team draft pick for the Padres (from the Houston Astros, having played in only 39 games in two years) but in 1969 (the Padres inaugural year) Colbert led the team in home runs (24), triples (9) and RBI's (66). The Padres only won 52 games in 1969 but Colbert was an emerging star first baseman. 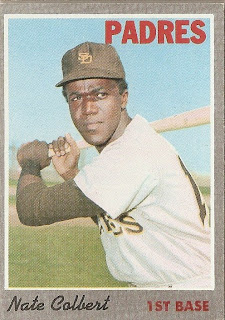 His 1970's card shows his intense look and a very young clean shaven face; both of which would change drastically over the years.

Nate Colbert is the all-time leader in San Diego team history for home runs (163) and is in the top ten in many offensive categories including; 5th in total bases, 5th in at bats, 4th in slugging percentage and 7th in games played. The San Diego Padres have since recognized Colbert by inducting him in the team Hall of Fame in 1999.