A package from the UK

Many of you know the generosity of John from the UK and his blog "pursuit of 80s"; now I do too. Our bubble mailers waved at each other as they were floating along high above the Atlantic and mine arrived today. Knowing that I am was looking for Cubs cards and the Topps All-Star Rookie cards (you know those gold little trophies); John sent me a fine selection.

Three pitchers from the last place (ok tied for last with Montreal) 1975 Cubs, who won only 75 games that year. Starting in the middle is Ray Burris who led the team in wins (15) and innings pitched (238) and to the right is Darold Knowles who led the team in appearances with 58. Then there is Mike Garmen who I put in the first position only to make him feel a bit better about his 1975 stint as a Cub. My research found he did not play for the Cubs at all in 1975, going 3-8 with the 3rd place Cardinals.

Also in this package were two Bill Buckners: 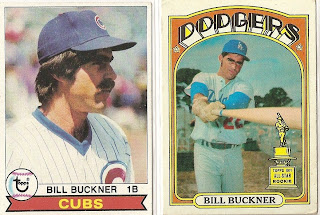 A clean shaven, young looking 1972 Topps All-Star Rookie card (I like those little gold trophies) even if it looks like he is going to knock the top off of it with his bat and his 1979 card when he hit .323. Buckner would go on to have his most productive years as a Cub, winning the batting championship in 1980 (with a .324 BA) and elected to his only all-star team in 1981 - while wearing Cubbie Blue. While he may be most remembered for that single ground ball in game six of the 1986 World Series, Buckner should be remembered most for his great hitting and for being a "great" Chicago Cub.

Thanks again to John of the UK . . .I will post a second blog about more cards he sent when my scanner starts working again.
Posted by Unknown at 5:59 PM